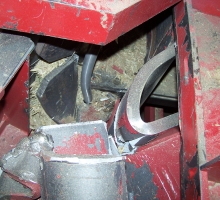 Ingenia was engaged to investigate the cause/s of the catastrophic press failure in which a press load and compression platens collided during production. The sudden and catastrophic crash came with no warning, and extensive damage was done to the weigh pan assembly, load and eject assemblies, fines conveyor system and associated safety fencing.

Working with the client to identify the best approach to assess the failure, Ingenia conducted a full investigation with a quick turnaround time. This gave the client all of the information needed for their internal use, allowing them to make decisions regarding moving forwards and fixing the damage that was caused. Using advanced tools, Ingenia was able to analyse the failed machine components, including stress, fatigue, vibration, and thermal factors to achieve accurate identification of the main causes and contributing factors of the failure.

Ingenia’s investigation identified four factors which combined to allow the crash. It was determined that if any one of these four factors had not been present the crash would not have occurred.

Ingenia provided the client with a full report of the investigation, detailing short term actions and long term recommendations to prevent the failure occurring again in the future.